Please do not forget to register!

Did you know that at any given time, someone is cutting pizza somewhere around the world? The decision about how to cut the pizza sometimes is easy, but sometimes it’s really hard: you want just the right amount of tomatoes and mushrooms on each slice. If only there was a way to solve this problem using technology…

The pizza is represented as a rectangular, 2-dimensional grid of R rows and C columns. The cells within the grid are referenced using a pair of 0-based coordinates [r, c] , denoting respectively the row and the column of the cell.

Each cell of the pizza contains either:

The goal is to cut correct slices out of the pizza maximizing the total number of cells in all slices.

The input data is provided as a data set file – a plain text file containing exclusively ASCII characters with lines terminated with a single \n character at the end of each line (UNIX- style line endings).

The file consists of: The file must consist of: Slices described in the example submission file marked in green, orange and purple.

For the solution to be accepted:

The submission gets a score equal to the total number of cells in all slices.

Note that there are multiple data sets representing separate instances of the problem. The final
score for your team is the sum of your best scores on the individual data sets.

Hash Code started in 2014 with just 200 participants from France. In 2017, more than 26,000 participants from across Europe, the Middle East and Africa took part in the competition. You can take a look at the problems and winning teams from past editions of Hash Code below.

Hash Code 2017, Final Round
Hash Code 2017, Final Round - Problem (1726 downloads)
Who doesn’t love wireless Internet? Millions of people rely on it for productivity and fun in countless cafes, railway stations and public areas of all sorts. For many institutions, ensuring wireless Internet access is now almost as important a feature of building facilities as the access to water and electricity. Typically, buildings are connected to the Internet using a fiber backbone. In order to provide wireless Internet access, wireless routers are placed around the building and connected using fiber cables to the backbone. The larger and more complex the building, the harder it is to pick router locations and decide how to lay down the connecting cables.

Hash Code 2017, Online Qualification Round
Hash Code 2017, Online Qualification Round - Problem (1795 downloads)
Have you ever wondered what happens behind the scenes when you watch a YouTube video? As more and more people watch online videos (and as the size of these videos increases), it is critical that video-serving infrastructure is optimized to handle requests reliably and quickly. This typically involves putting in place cache servers, which store copies of popular videos. When a user request for a particular video arrives, it can be handled by a cache server close to the user, rather than by a remote data center thousands of kilometers away. Given a description of cache servers, network endpoints and videos, along with predicted requests for individual videos, decide which videos to put in which cache server in order to minimize the average waiting time for all requests.

Hash Code 2016, Final Round
Hash Code 2016, Final Round - Problem (1429 downloads)
A satellite equipped with a high-resolution camera can be an excellent source of geo imagery. While harder to deploy than a plane or a Street View car, a satellite — once launched — provides a continuous stream of fresh data. Terra Bella is a division within Google that deploys and manages high-resolution imaging satellites in order to capture rapidly-updated imagery and analyze them for commercial customers. With a growing constellation of satellites and a constant need for fresh imagery, distributing the work between the satellites is a major challenge. Given a set of imaging satellites and a list of image collections ordered by customers, schedule satellite operations so that the total value of delivered image collections is as high as possible.

Hash Code 2016, Online Qualification Round
Hash Code 2016, Online Qualification Round - Problem (1439 downloads)
The Internet has profoundly changed the way we buy things, but the online shopping of today is likely not the end of that change; after each purchase we still need to wait multiple days for physical goods to be carried to our doorstep. Given a fleet of drones, a list of customer orders and availability of the individual products in warehouses, schedule the drone operations so that the orders are completed as soon as possible.

Hash Code 2015, Online Qualification Round
Hash Code 2015, Online Qualification Round - Problem (1602 downloads)
For over ten years, Google has been building data centers of its own design, deploying thousands of machines in locations around the globe. In each of these of locations, batteries of servers are at work around the clock, running services we use every day, from Google Search and YouTube to the Judge System of Hash Code. Given a schema of a data center and a list of available servers, your task is to optimize the layout of the data center to maximize its availability.

Hash Code 2014, Final Round
Hash Code 2014, Final Round - Problem (1497 downloads)
The Street View imagery available in Google Maps is captured using specialized vehicles called Street View cars. These cars carry multiple cameras capturing pictures as the car moves around a city. Capturing the imagery of a city poses an optimization problem: the fleet of cars is available for a limited amount of time and we want to cover as much of the city streets as possible.

If you’re interested in joining our hub, find a team (two to four people) and register at g.co/hashcode. Make sure to select Cyprus University of Technology from the list of hubs in the Judge System.

For more information about this and other hubs in Cyprus (including the twin event in Nicosia) visit https://goo.gl/uuRspx 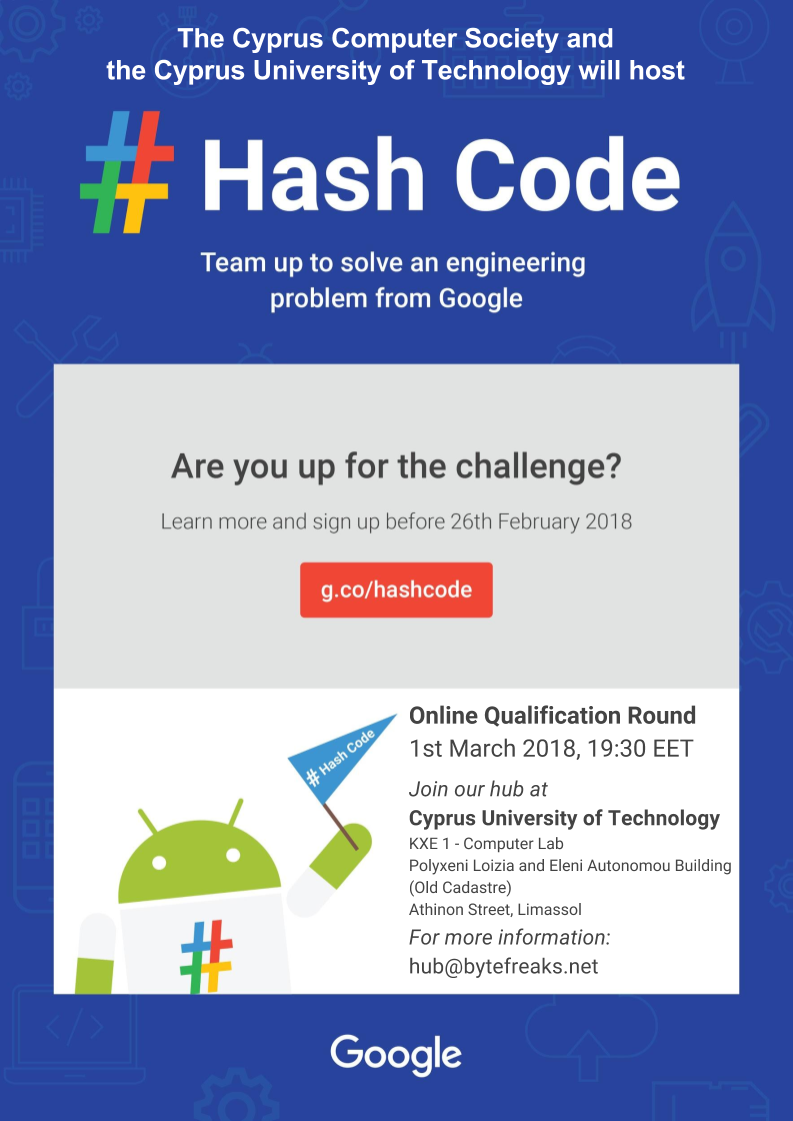 If you’re interested in joining our hub, find a team (two to four people) and register at g.co/hashcode. Make sure to select University of Cyprus from the list of hubs in the Judge System.

For more information about this and other hubs in Cyprus (including the twin event in Limassol) visit https://goo.gl/uuRspx 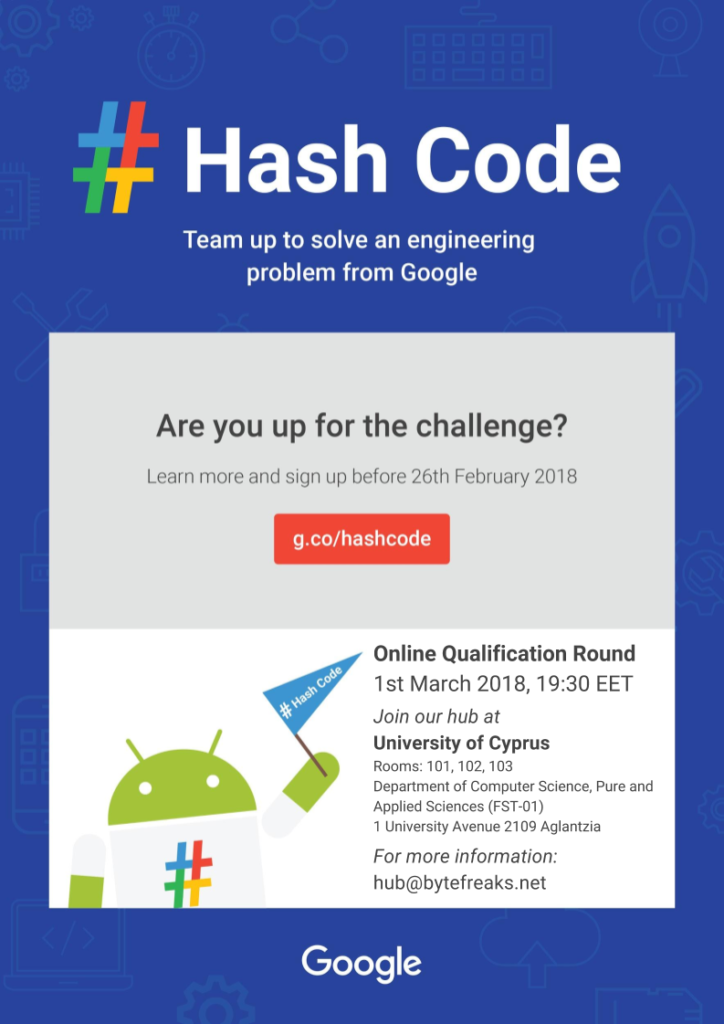